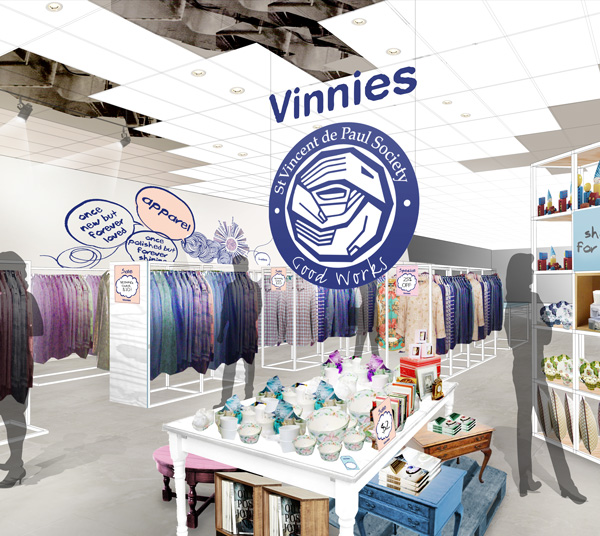 Up Front: All for a good cause

Vinnies shops, the retail arm of the charity, the St Vincent de Paul Society, have had a makeover in Victoria.

McBride is an experienced retailer and after benchmarking Vinnies stores against best-practice, he released that that store design was going to be pivotal in lifting retail performance.  “I had to think about how I could introduce best-practice into all Victorian stores.  In Victoria, there are over 100. I could see that the stores were sad and tired and needed improving”, says McBride.

RED worked with Vinnies to develop a strategy to not only improve retail sales, but to also encourage a culture of meaningful donation.

The Vinnies sales model is unlike a traditional retail model in that its success is entirely shaped by the quality of goods gifted. RED had to think of innovative ways to promote quality donations within tight budget parameters.

“We developed a design solution with an educational overlay”, says Aaron Chen, the RED interior designer who led the project. “We wanted all visitors to Vinnies, be they buyers or donators, to understand the importance of the charity and the amazing work St Vincent de Paul does around the world. Our design premise was that if they appreciated the value of the charity, they’d be more likely to buy, and if gifting, donate a higher calibre of item – one with resale value.”

Aaron explains that injecting some playfulness into the Vinnies brand was important to counteract feedback that the Vinnies brand felt ‘corporate’. Sarah Hotchins, one of RED’s graphics specialists, and a talented artist developed freehand sketches and imagery to bring personality into the stores. This has been translated into decals on windows and walls and eye-catching display signage.

The shops are also now laid out more strategically with items easier to find. Part of the attraction of a charity shop is its chaos, so Aaron and the RED team needed to create order in the layout without losing the treasure-trove, spontaneous nature of the shops. New purpose-designed fixtures de-clutter the shops without detracting from the experience of discovery. They have also been designed to allow greater density of product display. McBride says this has made a huge impact, “We can actually display about four times as much stock in the new stores. That means that the customer has four times more choice.”

Vinnies in Ringwood, VIC was the first shop to receive a make-over and others around Victoria have followed suit – ten so far with many more expected to follow. Excitingly, sales performance in the refurbished stores has exceeded the Charity’s expectations with some stores up as much as 100% on their sales. McBride talks enthusiastically about the increase in the quality of donations going up overnight in direct correlation to implementing the new concept.

When asked what he likes most about the new stores, McBride says, “The brightness, the friendliness, the smiles on faces. It looks like your walking into a fashion store as the product is so professionally and systematically presented. It’s not evident that you’re looking at a second-hand clothing store. The real excitement for me is the thrill I see in the volunteers’ faces, as they’re proud of what they’re doing and the environment that they’re working in.”

RED also found working with Vinnies a rewarding experience, both on a personal and professional level. The practice is thrilled that its retail design nous has increased revenue for the good works undertaken by St Vincent de Paul.

The success of the Vinnies concept highlights that great design that impacts performance doesn’t have to be expensive – just intelligent.